Whitney Tilson’s email to investors discussing the importance of controlling your inevitable emotions.

Get The Full Ray Dalio Series in PDF

Get the entire 10-part series on Ray Dalio in PDF. Save it to your desktop, read it on your tablet, or email to your colleagues

How To Handle The Inevitable Emotions

3) I’ve been playing a lot of tennis recently, particularly with my buddy David Berman of Durban Capital. It’s amazing how empty the outdoor courts are if you’re willing to play in sub-40-degree temperatures! Here’s a picture of us from a few days ago: 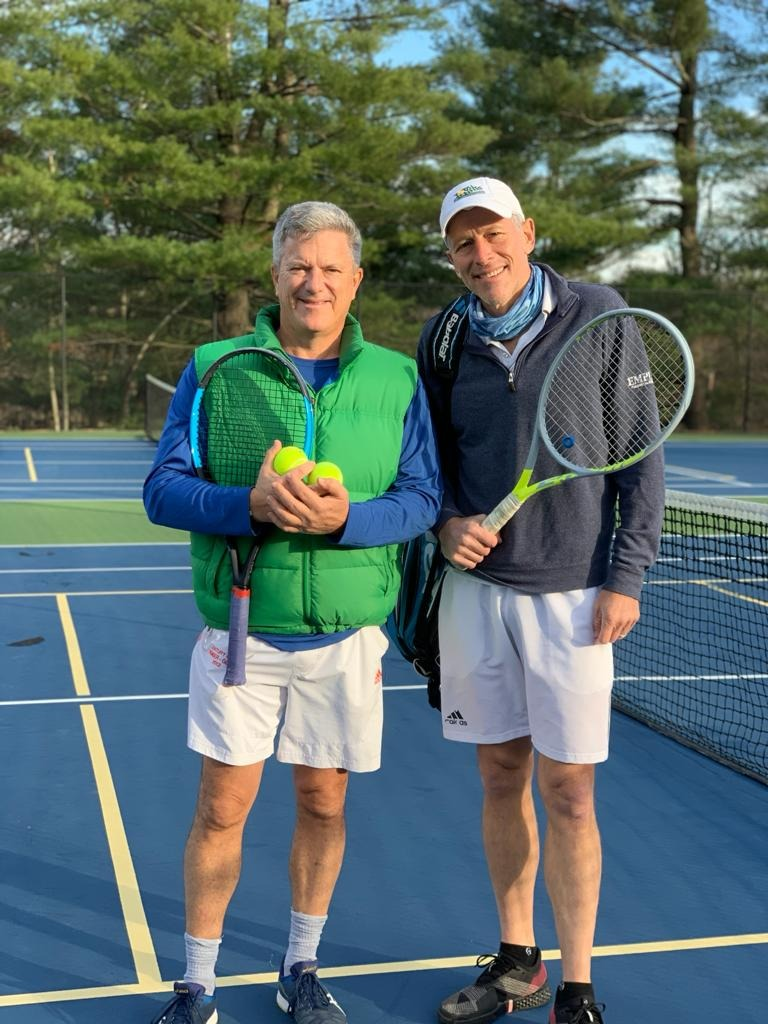 I had beaten him 6-0 a week and a half ago, but he got his revenge last Tuesday – crushing me by the same score.

I’m a super-competitive guy, and as the set unfolded, I got so pissed that I started swearing loudly and even threw my racquet a few times (I’m not proud to say)…

Do you think that helped my game? Of course not! Getting angry at myself and stewing over my missed shots detracted from my game – and, worse yet, by showing my feelings, it gave David a boost of energy and confidence. Talk about a lose-lose situation!

I saw this vividly on display recently when I watched a friend’s match at a local tournament. He was up 3-2 in the first set, and it was deuce. It was no-ad scoring, so the next point would decide the game.

During the rally, my friend hit a deep ball, close to the baseline, but clearly in (to him and to me, anyway). But his opponent called it out. My friend argued the call, to no avail.

I could see that he was beside himself with frustration and anger. In his view, his opponent had stolen a critical game. He should be up 4-2, not tied 3-3!

He never recovered, spiraling downward mentally and emotionally, losing nine of the next 10 games (and the match, 6-3, 6-1).

Terrible Things That Are Sure To Happen

As I thought about my friend’s experience and my own, I realized that the following six terrible things are sure to happen in every match I play:

Now that I know these six things are sure to happen, it’s helped me mentally prepare for them so I don’t lose my cool – and the match!

So, you might be wondering, why am I writing about this in an investing-related e-mail? Because the exact same factors are at work when it comes to successful investing.

Think about all the terrible things that are sure to happen to you at some point (probably many times) during your investing career:

As in tennis, you need to mentally prepare yourself for all of these inevitable setbacks so you don’t get emotional and make the wrong decision – often at precisely the wrong time – as I did years ago…

I still get a knot in my stomach thinking about how badly I played chipmaker Micron Technology (MU). After seeing a brilliant pitch for it by David Einhorn of hedge fund Greenlight Capital in late 2013, I bought MU shares around $19 (indicated by the red circle in this chart): 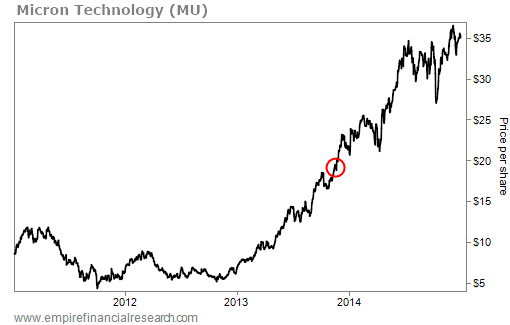 As you can see, it quickly doubled over the next year.

But I didn’t sell any and then failed to see the turmoil that would hit the semiconductor sector, so I watched the stock crash to around $10 per share.

I was so miserable – and angry with myself for not having at least sold half of the position – that one day in early 2016, in a burst of frustration, I just blew it out (indicated by the second red circle): 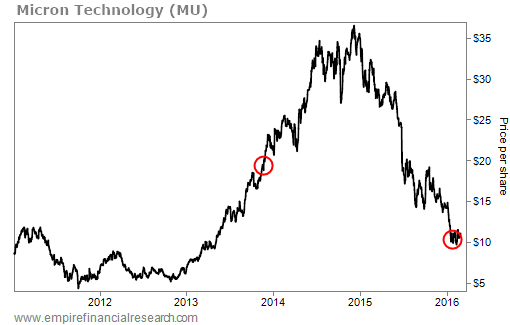 Even if you don’t follow the stock, you know how this story ends, right? It skyrocketed by more than 500% in the next two years… ARRRRRHHHHHHH!!!

I’ve written a chapter of my upcoming book, The Rise and Fall of Kase Capital, on what to do when a stock is running against you (and how to handle the inevitable emotions), which I’ll be sharing in upcoming e-mails…

The post The Importance Of Controlling Your Inevitable Emotions appeared first on ValueWalk.